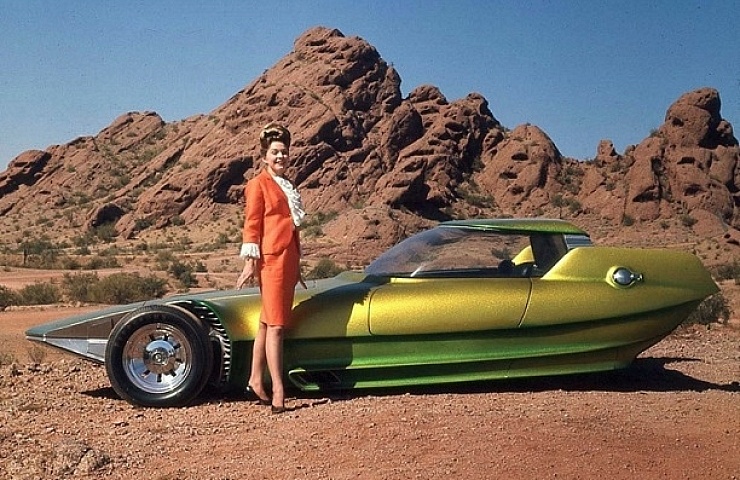 The 2017 Pebble Beach Concours d’Elegance, which took place on Aug. 26, paid tribute to post-war automotive design with this year’s special class: “American Dream Cars of the 1960s.” Car design in the US made revolutionary advances after World War Two. The big and bulky forms of the pre-war period were replaced by sleek shapes, highly influenced by jets and rockets—and in some cases prompted by a desire to revive European specialty marques. It was a period of optimism, high concepts, and big dreams.

The influence of space-age design was on full display with the 1960 DiDia 150—a gorgeous concept car with a jet-like profile, oversized fins rising high from the wheel wells, ruby-red hubcaps, and white-wall tires. Designed by Detroit clothing designer Andrew DiDia, the body was formed from soft aluminum and hand-crafted in excruciating detail over a seven-year period. The DiDia 150 is powered by a 427 cubic-inch Ford high-performance engine.

The DiDia’s finish was completed by George Barris’s North Hollywood shop and consists of 30 coats of Swedish Pearl Essence, mixed with tiny crushed diamonds. The opulent car is more than 18 feet long. Its torsion bar operated “Skyview” roof sections, a double wraparound windshield, disappearing headlights, a Plexiglas rear window, and a side-opening trunk. Singer-songwriter Bobby Darin bought the car in 1961 and drove it to the 34th Academy Awards with his wife, actress Sandra Dee.

Jefferies’s car is a masterpiece of engineering and style. The chassis is a prewar Maserati Grand Prix car with a hand-built body of tubular steel. It was painstakingly covered with over 86 pieces of welded and formed sheet aluminum. Jefferies created the car’s signature bubble top on a rig that blew hot air into molten Plexiglas until it bubbled to the desired size. A 289 Ford V-8 with four Webber carbs, given to Jeffries by Carol Shelby, powers the asymmetrical car. The car sits on 15-inch Halibrand magnesium wheels and Goodyear Blue Streak racing tires.

Cross-Atlantic influences on American design were evident in other exquisite cars at Pebble Beach. Famed American auto designer Virgil Exner—considered the father of the tail fin—designed the 1965 Bugatti Type 101C. It was built on the last chassis produced by the original Bugatti company of Molsheim, France. The Bugatti Type 101C, created to revive the prewar marque, was built by Carrozzeria Ghia using Exner’s design. It’s powered by a supercharged 200-horsepower straight 8. In 1965, the car was exhibited at the Turin Auto Show in an unsuccessful attempt to garner orders for the custom design.

Gene Winfield, the legendary car customizer, designed The Reactor—which was commissioned and built for the 15th annual Hartford Autorama in 1965. It features a four-wheel fully independent self-leveling suspension from a 1956 Citroën DS and a flat six-turbocharged engine sourced from a Chevrolet Corvair.  Initially called the “Autorama Special,” it was later purchased back by Winfield, who renamed it The Reactor.

The combination of the Citroën chassis and Corvair engine created the opportunity for the low hood.  The self-leveling suspension allowed for the low ground clearance—as narrow as four inches.  The hood, doors, roof, and headlights can be actuated by remote control. In its later life, The Reactor became a popular Hollywood TV show car appearing in episodes of Star Trek, Bewitched, Batman, and Mission: Impossible.

Other innovative 1960s American models on display the 2017 Pebble Beach Concours d’Elegance were: the XR-G futuristic hot rod by Tex Smith; the Farago CF 428 built for John DeLorean; the way-out 1967 Gyro-X Alex Tremulis Prototype that uses a gyroscope to keep the car upright; and the Alfa-inspired 1965 Pontiac Vivant Roadster by Herb Adams.